Today, The Hundred and global headwear brand New Era launch a collection of caps with designs for each of the eight city-based teams taking part in this summer’s inaugural cricket competition. The range – along with other team kit and merchandise - is available from The Hundred’s online store which launches today.

The Hundred joins some of the world’s most renowned sports, including the NBA, NFL and MLB, in its association and official three-year partnership with New Era. To kick off the collaboration, caps in the headwear giant’s famous style, the 9FIFTY Stretch Snapback, have been created for all of The Hundred teams including: Birmingham Phoenix, London Spirit, Manchester Originals, Northern Superchargers, Oval Invincibles, Southern Brave, Trent Rockets and Welsh Fire.

The new headwear collection is now available from The Hundred online store at thehundred.com, with three different styles of cap - the 9FIFTY Stretch Snapback, 9FORTY Snapback and 39THIRTY Stretchfit - retailing at £31, £19 and £26 respectively. Fans can also get their hands on the New Balance player kit and other merchandise ready to support their favourite teams this summer through the store.

Laurence Joslin, Brand Director EMEA at New Era, said, “With the sports fan in mind, we have created a unique collection of caps inspired by the essence and personality of the teams participating in The Hundred. We want to excite the fans and give them the opportunity to champion their team through headwear.”

The Hundred launches this July in line with the summer holidays, and fuses fast-paced cricket with high-energy entertainment, with eight brand new city-based women's and men's teams, featuring world-class players from across the globe.

To get access to the online store and sign up for early access to tickets visit thehundred.com. Tickets for The Hundred will go on sale through a priority window on 7 April, with general sale beginning on 21 April. Refund policies will be in place should matches be affected by Covid.

You won’t want to miss out on this summer’s sporting entertainment event! Join us for the latest news and priority access to tickets by signing up at thehundred.com

Since 1920, New Era has been handcrafting the finest headwear in the world. Today, with apparel and accessories lines, the brand is a market leader rooted in sports and an influencer of street and lifestyle culture around the globe. With over 500 licenses in its portfolio, New Era is the brand of choice in the worlds of sport, fashion, music and entertainment. The Company is headquartered in Buffalo, N.Y., and its products are sold in more than 80 countries. For more information visit www.neweracap.eu and @neweraeurope. 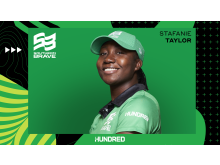