To tie in with the work of The Captain Tom Foundation and to bring together the cricket family to harness the spirit of Sir Tom and raise money for charity, the ECB will be donating £100 to The ACE Programme for every hundred scored during professional and recreational cricket over the Bank Holiday weekend.

The ACE Programme is a charity designed to engage a new generation of Black players within the recreational game and cricket talent pathway.

The ECB's donation - up to a total of £100,000 - will contribute to the work of The Captain Tom Foundation in inviting people to participate in the Captain Tom 100, which encourages members of the public to undertake individual challenges to raise money for charities across the UK.

England cricketers Sophia Dunkley, Danni Wyatt, Liam O'Brien, Jofra Archer and Chris Jordan have contributed to a video which will encourage members of the public to take on any challenge linked to the number 100 in addition to a donation to a charity.

The MCC has arranged for the Captain Tom 100 weekend to be launched at Lord’s on the morning of Friday 30 April with Captain Tom’s family ringing the bell on what would have been his 101st birthday.

ECB Chief Executive Officer, Tom Harrison, said: "Captain Tom’s love of cricket was well publicised - and clear for all to see - and we were incredibly proud to be able to facilitate some genuinely heartfelt moments between him and our England teams last summer.

"He had a massive impact on the British public and it means a lot to our game to work alongside the Captain Tom Foundation in trying to spread that message and his charitable legacy further.

"Hopefully our fans will be inspired to take on their 100 challenge and donate to The ACE Programme or a charity of their choice, and there's extra incentive for recreational and professional cricketers across England and Wales to reach three figures this weekend - in the knowledge that doing so will see The ACE Programme receive additional donations."

To find out how to support the ACE Programme contact them on info@aceprogramme.com.

The ECB are proud to work with Chance To Shine, Lord's Taverners, the Professional Cricketers' Trust, and the Ruth Strauss Foundation - amongst a number of other causes. Follow the links to find out more and donate. 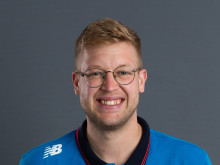